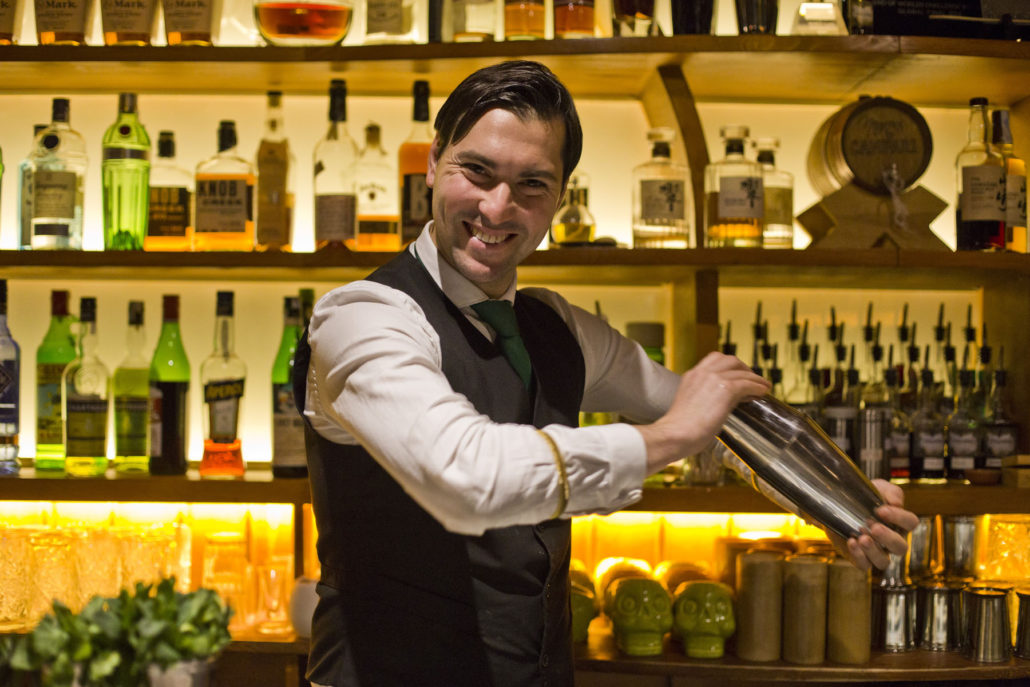 When I was young the drinks were elaborate when they had a tiny little umbrella in them. Netflix lets us dwell in 90s nostalgia thanks to 10 seasons of Friends, and we laugh when Rachel and Monica sit in a fancy bar in Las Vegas and drink plain old boring screwdrivers.

But this is 2017 and things have changed. Barcelona has been hit by fresh wave of young creative geniuses that are stepping up the game. Giacomo Giannotti left his native Italy and came to Barcelona and as a true master of his trade he won the 2014 World Class competition in Spain with his masterpiece Mediterranean Treasure. The drink is currently being served in Paradiso, speakeasy where he is head bartender,  in Barcelona, and it comes in a small treasure box. When you open the box out comes rosemary and thyme smoke and inside you’ll find a beautiful seashell filled with a tasty Mediterranean-inspired cocktail. The seashell is decorated with an oyster leaf (a kind of green that tastes just like oysters!) and a small edible pearl. A highly sensory experience.

In Paradiso all cocktails are surprising in one way or another. And so is the location: deep down the narrow alleyways of Born we find a little pastrami bar. Inside that pastrami bar there is an old fridge door. We open the door and we find ourselves in an elegant but cozy space that looks like it’s taken out of a magazine. Barcelona isn’t famous for its speakeasies, but master mixologist Giannotti decided he wanted to create something different. And he most certainly did. 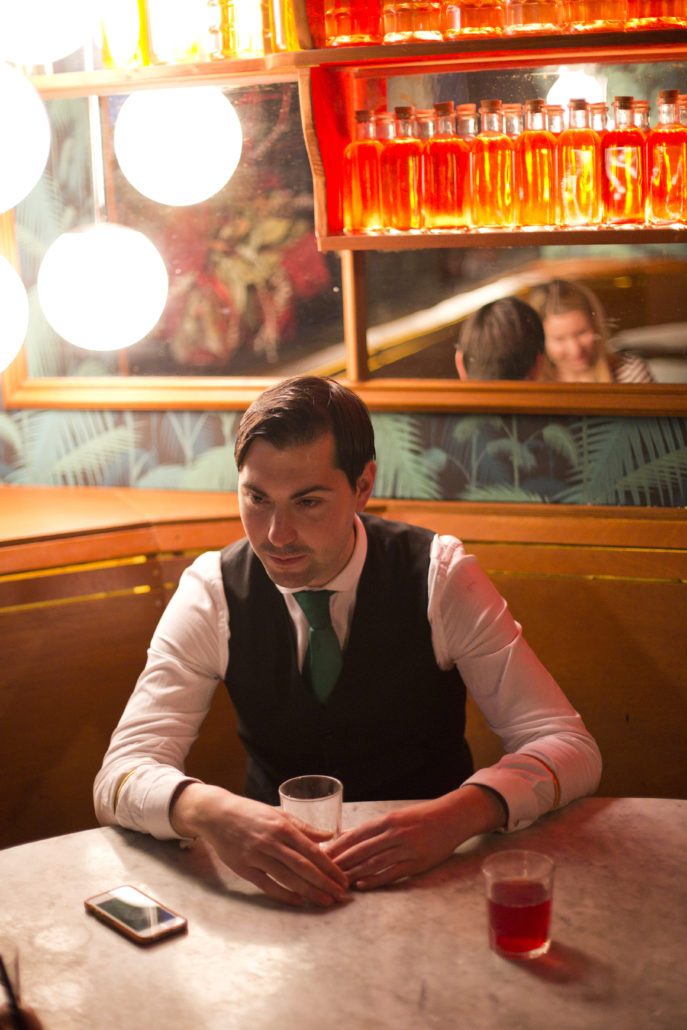 We caught up with Giacomo for an in-depth chat around the process of creating a cocktail inside the mind of a stellar mixologist. Giacomo tells us that the first thing he looks for is always the flavor. Simply put: the cocktail needs to taste good. The he sees how it fits to the drink menu and what he is looking for to complete it. A good cocktail menu needs to include something for every kind of customer and taste.

After this comes the vessel: how is the drink going to be presented? “The glassware needs to be related to the ingredients and the concept” says Giacomo. “The final point is the decoration. The visual aspect is important, and it needs to relate to the ingredients” he continues. In Paradiso they want to deliver the visual presentation through for example the glassware or an effect like smoke or vapor.

The decoration definitely needs to have a sense

Does the decoration always have a purpose or is it ever there just to be pretty?

“The decoration definitely needs to have a sense”, says Giacomo. “I would never do something that doesn’t have a sense. I would not put a marshmallow on top of a drink just because it’s fancy.” In Paradiso the decoration is often edible he says, but in some cases they serve a purpose for the aesthetics, a rose petal for example that is added for a bit of color.

We want to know if there is any situation where he would sacrifice taste for a beautiful visual experience. “No, never” he says. But he wants to find a specific touch for every drink. “In Paradiso some drinks are more spectacular than others, but even if not all of them come with smoke or dry ice they can still be very elegant.”

Some liquors might be associated with gender. Would a cocktail with bourbon require a more “masculine” presentation? It’s not necessarily the case says Giacomo. Historically the Old Fashioned or the Manhattan have tended to be a masculine drink and gin- and vodka-based drinks more feminine. However you can make a refreshing twist to a bourbon drink and take a step away from stereotypes. And we know Giacomo and stereotypes don’t fit in the same sentence.

The ideas can come from anywhere he says: “a museum, a vintage market, a flower shop, a museum or a pastry shop. Even from a movie

What is the creative process like for someone who lives and breathes mixology? Giacomo says he can be triggered from a beautiful piece of glassware that instigates the idea of a new cocktail. When he travels he gathers ideas: he came home from a recent trip to Cuba with his mind brimming with flavors: cigar, banana, chocolate and coconut to name a few. From Asia he takes with him the experience of the local dishes and flavor combinations that inspire him to create.

The ideas can come from anywhere he says: “a museum, a vintage market, a flower shop, a museum or a pastry shop. Even from a movie.” In Barcelona he goes out to find inspiration too, he enjoys going out for dinner and get inspired from the gastronomic experiences. 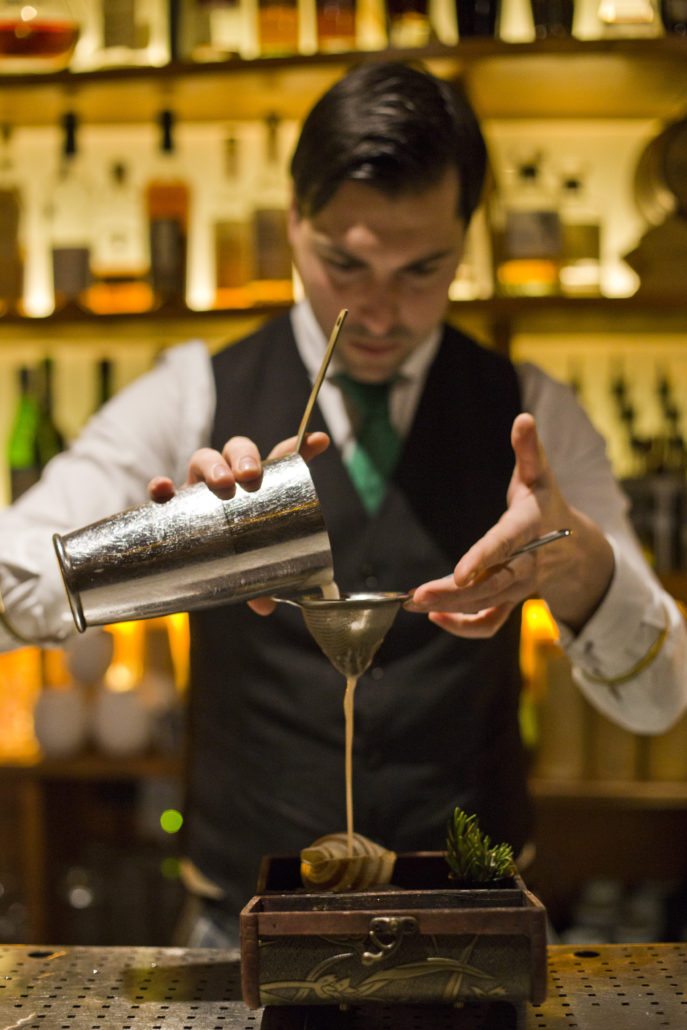 We ask Giacomo if he has any favorite props. “No, I like to change things around a lot so that all the cocktails are different”. He wants to constantly change and evolve, and this means his cocktails will be different. “It would be disappointing if a group of friends would come to the bar, order different cocktails and they would all have a similar decoration”, he continues.

How does a cocktail expert challenge himself? Giacomo doesn’t want the process of creating a cocktail to be too easy. Paradiso is currently undergoing their annual menu change, and they want to come up with something surprising. He doesn’t want anything too common or simple, the customers come to the bar to try something different through the flavors or the presentation and that’s why they want to step up to the challenge. The team spends 12-14 hours a day in the bar; working on the menu, trying new flavors and serving the customers.

We’re also curious if as a co-owner of Paradiso the bar fully reflects his style. He says that this is definitely the case. He wants his style to be reflected in the drinks, the service, the ambience and the decoration. He is not very classic in his trade and likes to be different.

He credits his family for his appreciation of good quality ingredients. His family owns an ice cream shop and he’s grown up seeing how much importance they’ve paid to excellent raw materials and Giacomo want to make a connection to this in his work.

It’s fascinating how elaborate the drinks are in Paradiso but how down-to-earth the bar is. “I want it to be a democratic place” says Giacomo. It should be a place where both a 20-year old and a 60-year old can come and have a drink and feel at home. The prices reflect his feeling of democracy: the prices range from 7 to 12 euros.

Giacomo shared his award-winning cocktail Mediterranean Treasure with us: 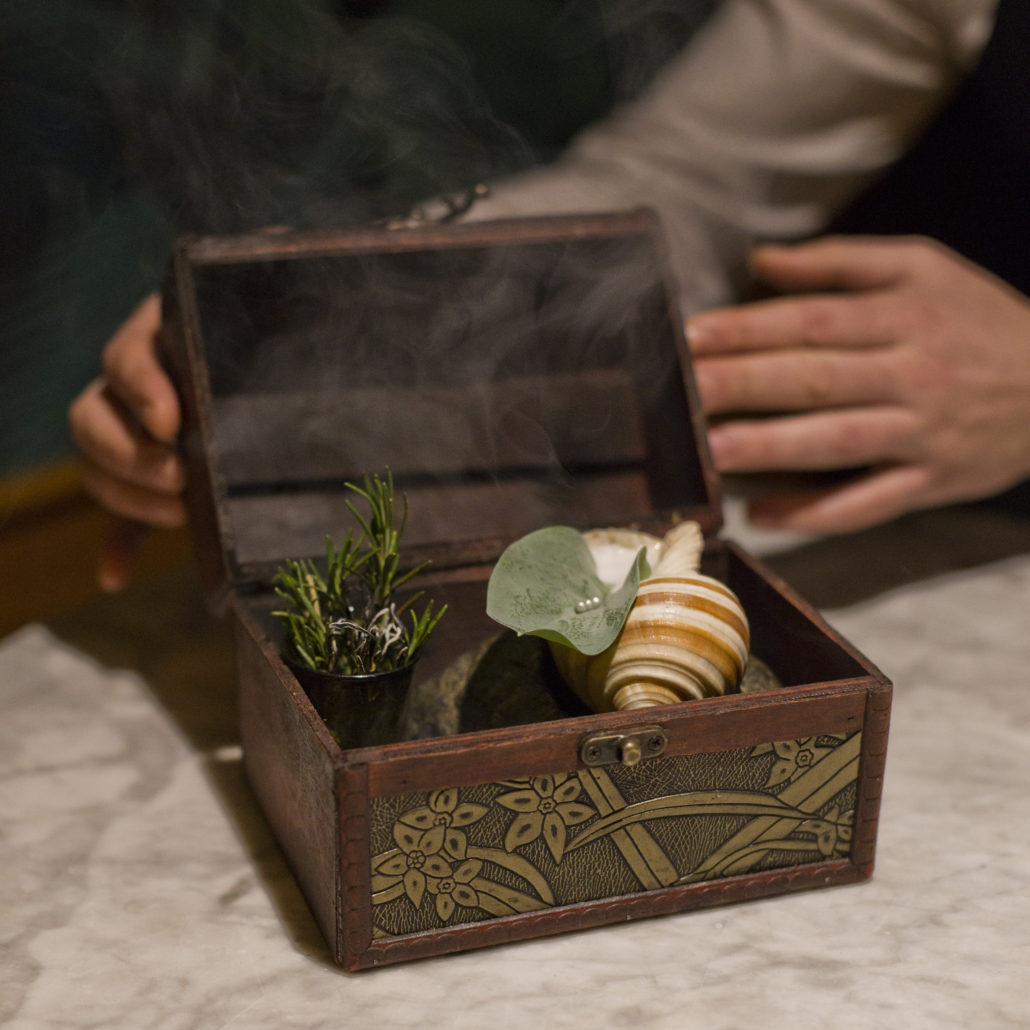